Back in January someone had the brilliant or maybe slightly bonkers idea of signing up for Brave the Shave to raise money for Macmillan Cancer Support.

The money raised will help Macmillan be there for more people who affected by cancer. They can give people practical, emotional and person support through cancer, from help with money to being there when they need to talk.

On the 5th April, which marked the end of National Young Adult Cancer Awareness Week, a handful of the BCS boys shaved their heads to raise money for Macmillan Cancer Support.

Steve, Eden and Nathan were brave enough to get the shave!

Our engineer Charlie who used to work in a hairdresser, so we thought would be the most trustworthy with the razor! Charlie got to work on Nathans and Steve’s hair, whilst, Eden was even braver and let our Service Director Harry hold the razor! Nathan and Eden both went to a grade 2, however Steve went the full monty!

The target we set ourselves was £500, and we did it! We managed to raise the whole £500 for Macmillan.

Thank you to everyone who donated, we really appreciate it, your money is going to a great cause! Well done boys for taking part and being such amazing sports. 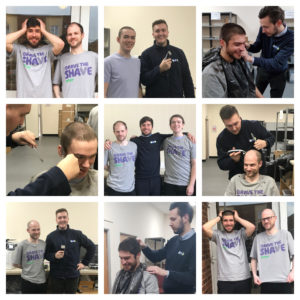