On Friday 15th March BCS celebrated Red Nose Day, we had a lot of fun and raised lots of money for comic relief!

All the money donated to comic relief goes to supporting vulnerable people and communities in the UK and internationally. Their vision is to create a just world free from poverty! Since 1985 Comic Relief have invested £1 billion to amazing causes.

BCS kindly bought everyone a Red Nose which meant the hunt for the rare red nose was on!!

We got the Gnose, the Hairy Noseroll, Nosedive, Conk Jester, Wolfnose, Schnoz III! But there was no sign on the rare Hoppy Hooter or the Transforminos… better luck next year, who nose what might happen!

We had a lot of fun in the office, with lots of Red Nose Day photos (even the notioriously hard to photograph Wayne got in the group selfie!)

BCS raised a lot of money of the brilliant cause, well done team! 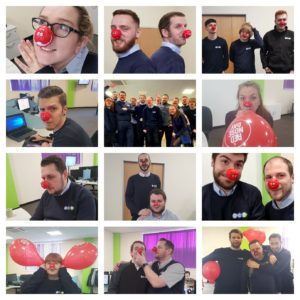