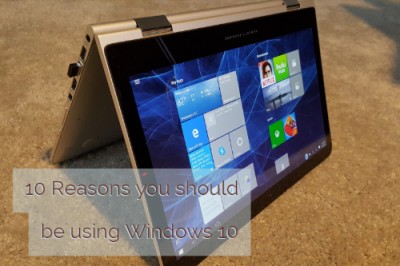 Microsoft Windows has been around for quite some time now, since 1985 in fact. Before that, there were other versions of Operating Systems, but Windows was the first with a graphical interface.

Roll on a few versions and we have the trusty and reliable Windows XP. From this point, there were many iterations and releases, but many people stuck with the tried and tested XP.

Windows 7 and 8 were heralded as the next big thing but again uptake was slow and performance was varied.

Microsoft needed to rethink Windows and that is exactly what they have done with Windows 10.

So why should you be moving over to Windows 10? Here are our top 10 reasons why you should be using Windows 10.

Speed has got to be one of the biggest complaints when using PCs in either a personal or professional environment. How many times have you heard stories of people saying they were going to make a cup of tea while their computer starts up? 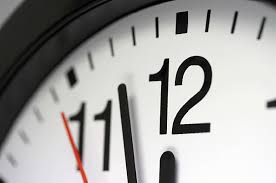 Well never fear, Microsoft heard this loud and clear and start-up speed was considered right from the start and now those using Windows 10 are waiting no more as their computers are booting up in lightning fast times. You will now need to think of another reason to go make your tea in the morning.

Only a few years ago, the idea of talking out loud with the expectation that technology would then respond to us seems like something from a Sci-Fi movie. Yet today it is really quite the norm with all the leading technology providers integrating voice and artificial intelligence into their software or hardware. Microsoft were no different and understand that we quite like barking orders at our tech to schedule, send, answer a question, find a file or even locate people and restaurants, and this is just the very beginning when it comes to voice control and artificial intelligence. Soon we will be using voice commands in our everyday life as well as our business life. Think of Cortana as your very own PA, although I am not sure she will collect your dry cleaning in person but could probably arrange to have it delivered.

The battle of the browsers has been raging for years. The good news is that it keeps all the technology providers on their toes and producing faster and more useful browsers and that is exactly what Microsoft has done with the latest version of Microsoft Edge. There are lots of technology-based improvements that are useful including the ability to easily share web content via social media and the ability to save a website page as a PDF to read later another device. But the real improvements are quite simply the speed.

Microsoft Edge for Windows 10 is lightning fast as it uses far less computer memory than other browsers and yet has even more functionality. You can also ask Cortana to perform tasks using Microsoft Edge.

The menu has been designed so it is useful for both desktop and touchscreen users as again Microsoft has built Windows 10 for multiple devices.

For those not using Office 365 but looking to take advantage of the next edition of Microsoft Office 2019, it is worth noting that it will only run on Windows 10.

The reason is simple Microsoft Office 2019 has been designed to take advantage of all the advancements and new features in Windows 10 which are very different from previous versions of Microsoft Windows. You can however still use Office 365 on Windows 7 and 8 while they remain supported.

Many other Windows applications are also built for Windows 10 for the same reasons.

Virtual Desktops are nothing new but now they are nowhere near as complicated and embedded right into Windows 10. Not sure what a virtual desktop is? Imagine having 2 separate instances of Windows running with one set of applications running on one and another set on the other but they are all running on the same computer. You can easily switch between desktops and work on specific tasks. This can be particularly useful when you wear different hats in your role. You can have one desktop for each role and keep things neat and tidy.

The action centre is the notifications that come from the bottom right-hand corner of the desktop. It was previously just system notifications that came through but in Windows 10 it includes so much more. Emails, reminders, and battery settings. Look out for more notifications as new Windows applications make use of this functionally.

You can however, control what you see and turn off notifications from the different apps, so you only see what you want too.

There are also a bunch of other useful shortcuts at the bottom of the Action Centre for things like WIFI, Bluetooth, Location Tracking and other settings.

You know the story, you get your nice new laptop or PC and you look at the hard drive space and a huge chunk of it is already being used before you even start. Well, Windows 10 is much better with its install size and takes advantage of some new compression tools which mean even updates are smaller and take up less valuable space.

Windows 10 is what Windows 8 should have been. Microsoft took a gamble on Touch with Windows 8 and IT managers avoided it, sticking with the tried and tested Windows 7. The good news is Windows 10 is 100% the right upgrade for both home and business users. It is a much more robust build and comes with security and speed at the very heart of it. Windows has committed to support until at least 2025 before it goes end of life, giving IT managers plenty of time to get this in place and still have a good return on the investment period before the next version is in place.

There are so many good reasons to move to Windows 10 and if nothing else, the security benefits alone are reason enough in our opinion. If you have questions about upgrading or would simply like some help in making the transition BCS are here to help. Our friendly team here are more than happy to help you plan any changes to ensure you keep any downtime to a minimum if at all. You can contact us by calling us on 01843 572600 or emailing us at hello@bcs565.co.uk